Your basket is empty.

We are a team of pilots and aviation enthusiasts whose aim is to enrich the world with a modern, varied and exclusive brand.

Our designs feature striking concepts and symbols from the world of flying which carry a strong personal statement.

Our highlight is an exclusive polo shirt, available as a limited edition of 999 items. This high-quality product is manufactured in Europe and the design was created in 2016/2017 to reflect all the facets of transatlantic flights.

Our basic line reflects the typical colours and designs of professional aviation. The design is similar to the limited edition polo shirt.

The fashion line unites a passion for flying with the feeling of leisure, freedom and adventure.

Our workwear department offers outfits exclusively for employees of flying schools or aviation companies. Please do not hesitate to contact us by e-mail. We look forward to advising you on appropriate products and applicable prices.

Solo across the North Atlantic - A woman alone in the cockpit 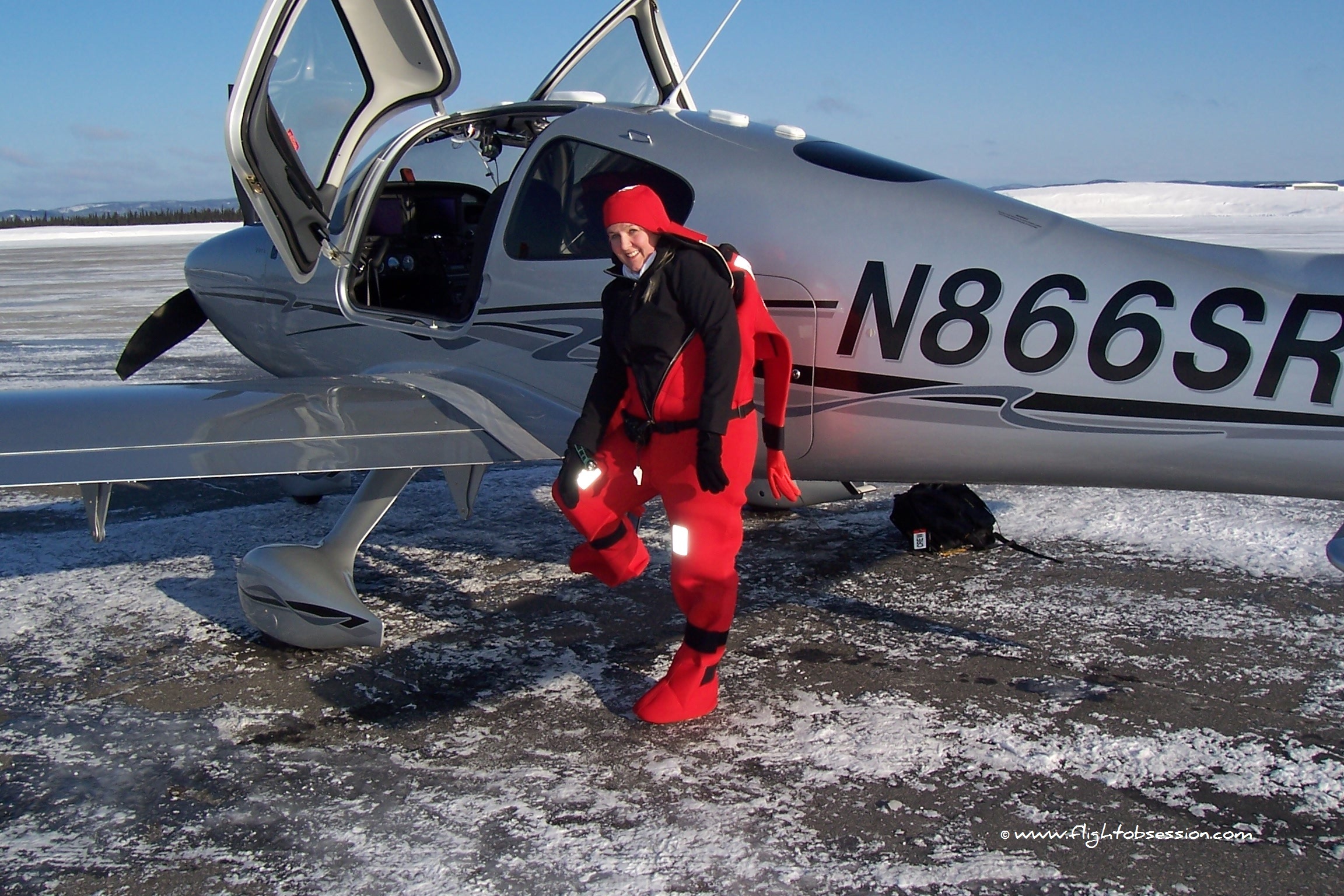 Reiskirchen | Christina Alexandra Ziech neé Schreiner from Reiskirchen is one of the few female ferry pilots of small sports aircraft in Europe and has some exciting tales to tell of eventful flights. In addition to her German license she acquired her American license as a commercial pilot after a six-month stay in Florida. Flying from Venice, she explored all the facets of the federal state. She has seen everything from Cedar Key via Atlanta, Daytona, Miami, the Bahamas, Key West and the Everglades to Naples. But she also ventured into the airspace between Denver/Colorado and Florida.

After obtaining her American pilot’s license in 2008 she returned to the USA to the Cirrus aircraft manufacturing facility. From here she made several ferry flights in single-engined aircraft types SR20, SR22 and SR22 turbo, with and without an additional tank, across the North Atlantic to Europe where they were purchased by private buyers or clubs. Alone in her machine, she flew across Canada with a stopover in Ottowa, Montreal or Sept Iles for refueling, then on to Goose Bay/Newfoundland. On both flights the aircraft is in the air for over four hours, ample time to enjoy the majestic views of Canada’s lakes and forests.

Eight hours highly concentrated flying a day are normal, and it does not exactly make it easier if you are flying East against the clock. This kind of flight is a challenge even in summer and has to be planned meticulously, as the machine ices up below zero degrees in clouds at high altitudes which renders the aircraft unable to fly. There is a danger of this especially over Greenland where you have to fly at high altitudes. Christina is sometimes forced to fly lower to escape from icing conditions. The documents also have to be in order and the flight route must be oriented to fuel stations, which is not always possible. There are not many alternative airports along this route.
Christina was welcomed in Goose Bay by unbelievably friendly and helpful airport and hotel staff. „Trappers“ restaurant invited her to barbeque her own steaks and several groups of brown bears were sighted on the local waste disposal site. The next leg across the North Atlantic to Greenland began with an early start at 6 a.m. and took 4 to 4 ½ hours. In these latitudes intensive flight preparation is extremely important and is often no easy feat, particularly with regard to the weather. 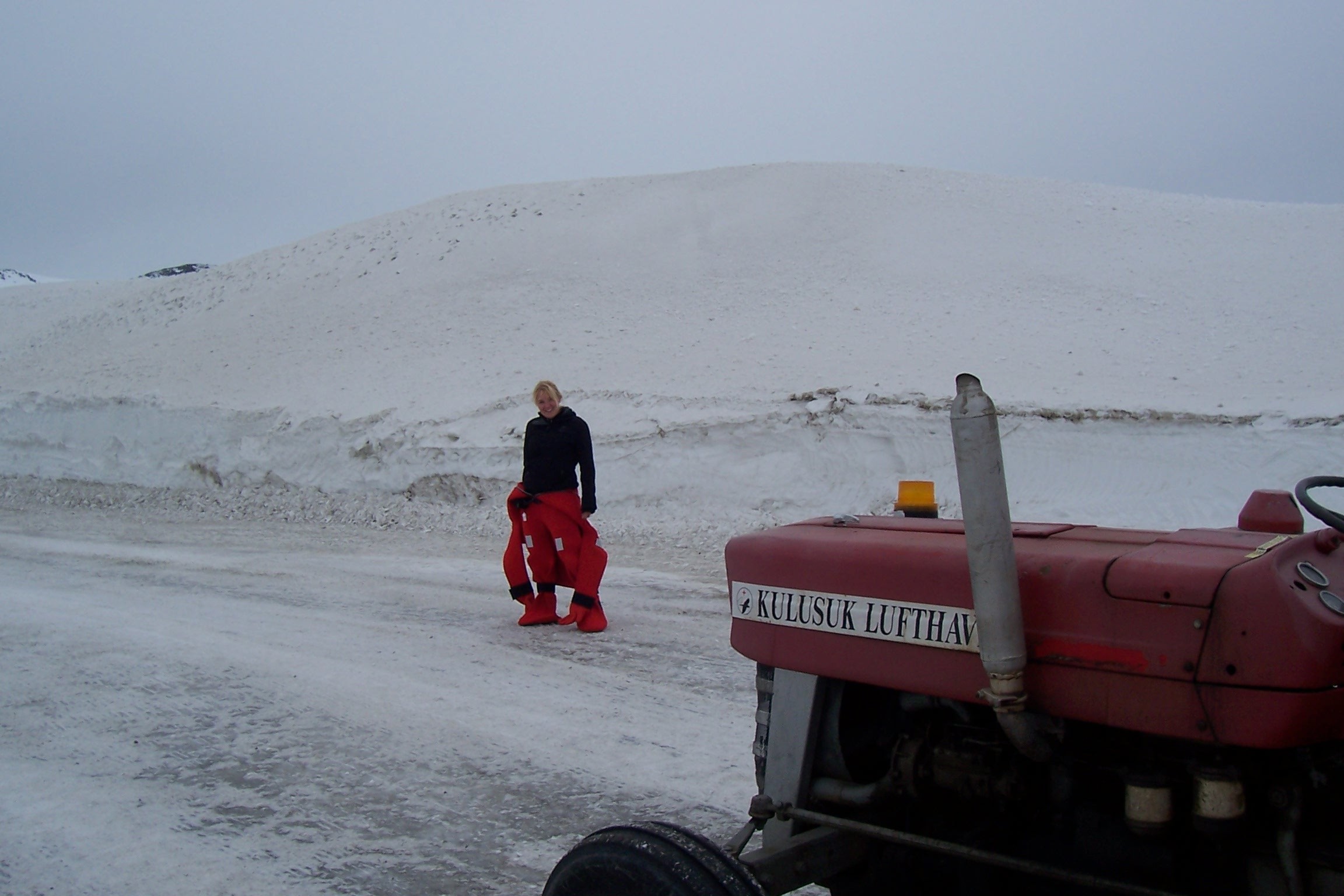 Small aircraft cannot make intermediate landings, and the amount of fuel calculated means the right decision has to be taken before takeoff: to fly or not to fly. Commercial airliners served as reference points for the transmission of her position data, as she was so far out over the Atlantic that she sometimes had no contact to ground control for two hours or longer. On reaching Greenland she was greeted by spectacular landscapes:  icebergs taller than skyscrapers drifting in fjords in the deep blue Atlantic waters and water spouts from whales surfacing for air.  After a short stopover in Narsarsuaq for refueling (sometimes in Nuuk, Kangerlussuaq or Kulusuk, depending on the weather) and some small talk, the journey continued across the perpetual ice to Iceland, weather permitting. It sometimes took half an hour to climb from sea level at the fjord airport to flight level 130 (13000 feet/nearly 4000 meters) in order to cross the ice cap. 4 ½ hours later she arrived in Reykjavik or  Keflavik, where one is often greeted by bad or stormy weather.

Reykjavik was the more attractive choice, as it is a beautiful town well worth visiting where you can enjoy the flair and become acquainted with extremely nice people and their way of life. Occasionally an Iceland depression would force her to prolong her stay and give her the chance to visit the geysers. Once on Midsummer night she flew on to Scotland at 3 a.m. in bright sunshine.  On arrival the peace and quiet, the lush green meadows and old buildings (fortresses, castles, lighthouses, ruins) are an invitation to daydream. But a stiff breeze often makes landing tricky and after nearly five hours in the air you have to have your wits about you.
From here on in, radio contact to ground control is no longer as relaxed and casual as it is in the USA, Canada and over the North Atlantic, where there was partly no radio contact at all and where small sports aircraft are allowed to land at international airports between Boeing and Airbus without having to pay horrendous taxes. The young pilot continued her flight down the coast of England to the usual transit corridor to Amsterdam. It is not possible to fly straight across the North Sea during the week as restricted military zones are in use. 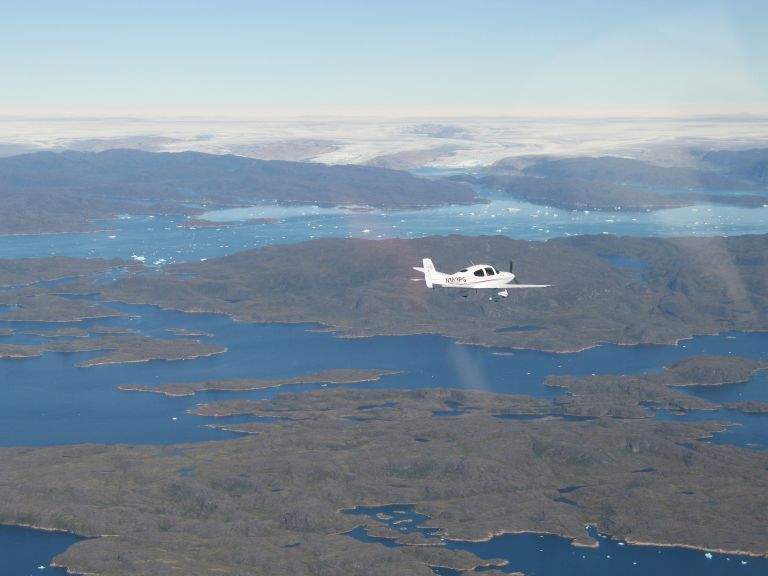 Owing to the unaccustomed constant radio traffic the flight from Holland to Frankfurt-Egelsbach seemed to pass in no time at all, unlike all the other flights over water. The American registration accompanied by a female voice in Frankfurt airspace made some pilots and ground staff curious and on contacting her by radio they were amazed to find out where she had originally brought the machine from.
The total flight distance covered 7890 kilometers (approx. 3400 kilometers over water) normally with six stopovers and an average cruising speed of between 250 and 300 kilometers per hour. A survival suit and a fully equipped life raft for four people are mandatory. The modern Avidyne glass cockpit and Garmin Perspective made it easier for her to fly such long distances alone. The CIRRUS is also equipped with a parachute which in an emergency is shot through the outer skin by a rocket and allows the aircraft to gently glide down vertically to the earth or water. Within the space of a year Schreiner only came across six other male ferry pilots who carry out such transfer flights.

(special thanks to Gwyneth Schulz for the translation) 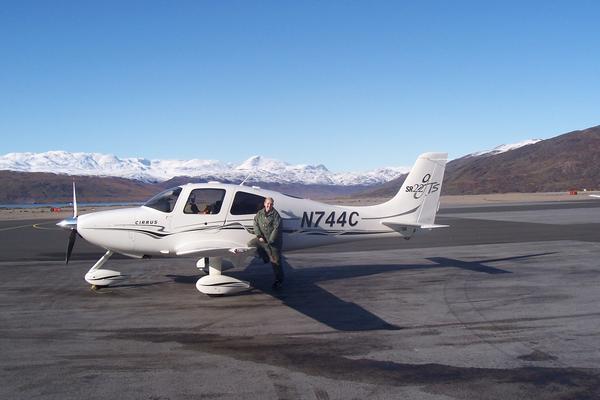 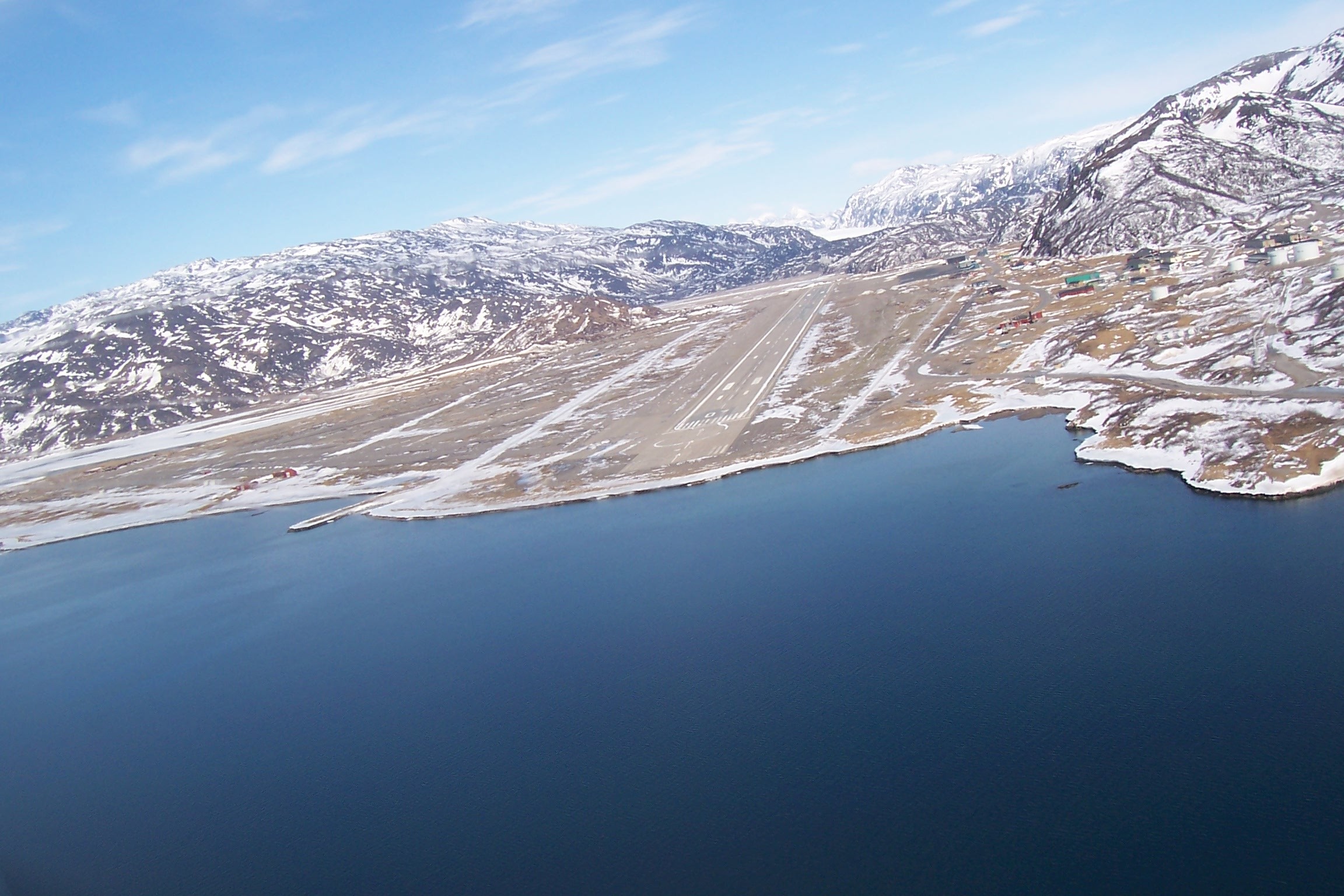 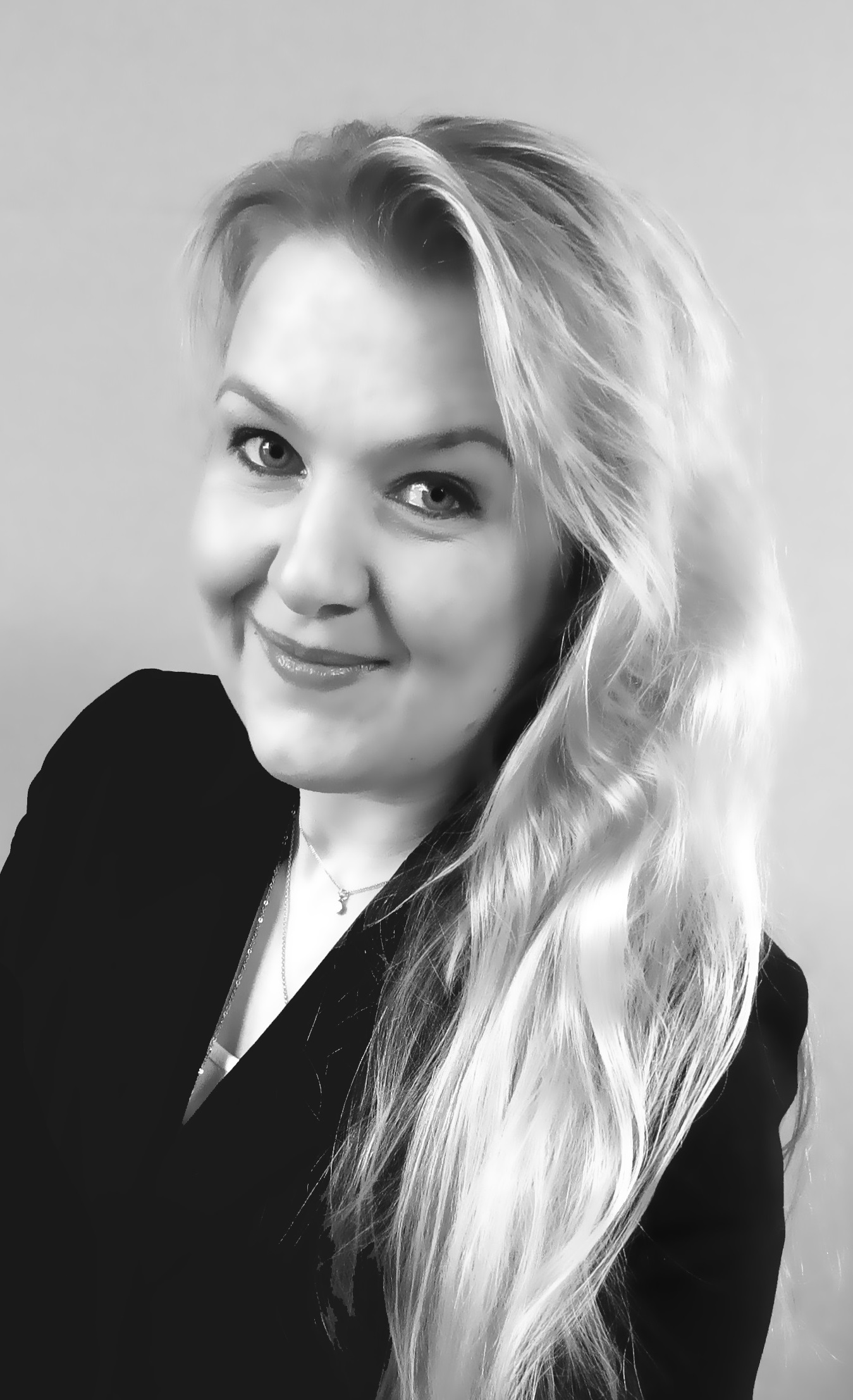